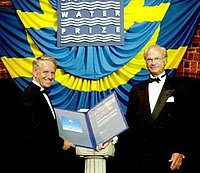 Huber supervisory board member Professor Peter A. Wilderer was awarded this year's

The Stockholm Water Prize is the highest international environmental award presented by the Stockholm Water Foundation annually in honor of outstanding achievements in science, engineering, technology, education or public policy related to protection of the world's water resources.

In a news conference at the Stockholm City Hall, Professor Anders Stigebrandt, chairman of the international Nominating Committee, read the motivation:
"Professor Peter A. Wilderer is awarded the Stockholm Water Prize for the development and demonstration of integrative approaches to water and wastewater management across the spectrum of fundamental research, applied research, technology implementation and sustainable water management."

Professor Wilderer received the Prize as first german scientist from His Majesty King Carl XVI Gustaf of Sweden at a ceremony in the Stockholm City Hall on Thursday, August 14, during the annual World Water Week in Stockholm.

We congratulate Professor Wilderer and hope for a continued successful cooperation!