12.05.2011
On Monday, May 9th 2011 the official opening ceremony for the ThermWin® pilot project for wastewater heat utilisation took place at Straubing.

The project managers together with Dr. Söder (sixth from the left) symbolically activated the start button

Dr. Söder underlined in his speech the special importance of innovative projects for a successful energy turnaround 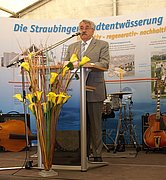 Dr.-Ing. E.h. Huber spoke not only as supervisory board chairman of HUBER SE but also as representative of Umweltcluster Bayern

The heart of the plant is the HUBER RoWin Wastewater Heat Exchanger which extracts 210 kW thermal energy from the wastewater flow in the sewer. This energy is used to heat 7,150 m² living space. Representatives of the church and as guest of honour Dr. Markus Söder, Bavarian State Minister for the environment and health, were present at the ceremony.

Numerous other guests had come at the invitation of the city of Straubing to listen to the words of State Minister Söder and the speeches of Markus Pannermayr, mayor of Straubing, Cristina Pop, head of the city’s civil engineering office, and science centre director Prof. Dr.-Ing. Martin Faulstich. Dr.-Ing. E.h. Hans Huber, supervisory board chairman of HUBER SE and speaker of Umweltcluster Bayern (Bavarian Environmental Technology Cluster) praised the courage and persuasive power of the protagonists of the Straubing project. Both were important for the successful implementation of this pilot project. “The plant could meet all expectations already during its first winter in operation, which came unexpectedly early and was really severe”, he said and pointed out the climate-friendly heating of the 102 apartments with a CO2 emission that is by up to 80 % lower than that of conventional heating systems.

Mayor Markus Pannermayr welcomed the guests from politics and economy but also many residents and all other visitors who had come for interest and thanked among other the Bavarian ministry of the environment for the financial support of the project before he handed over to Dr. Söder who had come to Straubing for the second time already. The first time he had been there was for the groundbreaking ceremony. He said that such future-orientated projects would be a matter of personal importance for him. This wastewater heat recovery project had impressed him so much that he had praised this innovative technology to the skies when he was in India recently. Dr. Söder explained his way of energy turnaround and pointed out the importance of such technologies for the safe and costeffective energy supply in the future.

Prof. Faulstich quoted Dr.-Ing. E.h. Huber as he said that “an innovation is only an innovation when it has successfully been implemented”. Everyone could convince himself on the spot that this is the case at Straubing. After the official ceremony the guests enjoyed a delicious buffet accompanied by fine jazz music.